The world of marking technologies is so vast that it has affected all of the world. In a good way, obviously. If we name a few, there is inkjet marking, electrochemical etching and marking, dot peen marking technology, and laser technology. Out of all these, laser stands out prominent.

All because of the fact that it produces precise, accurate, and speedy outputs. What’s more to laser engraving technology is the option of choosing between 2D and 3D. It all depends on your requirement but this technology makes sure that you are covered in all aspects.

If you are new to 3d laser technology, bear with us as we go through all the necessary details about it.

What Makes It So Special?

Let us give you some recommendations of the machines that can be used for 3D laser engraving.

On the other hand, the machine skips the lighter patches altogether. However, the shades that are neither in dark patches nor in light patches receive different levels of power to create the amazing 3d pattern. Apart from that, the regions that contain depths and slopes are given so by adjusting the depth of the laser beam. This is how breath-taking 3D art is made.

3D laser engraving is different in terms of the input. It’s a lengthy and demanding process but once you feed your input to the machine, wonders start happening. Basically, all the designs, patterns, photos or logos, etc are created on a 3D modeling software that comes either built-in with the machine or is a third-party purchase.

Once the drafting of designs on the software is done, the laser starts its work. It concentrates the focused beam of laser on a point that lies below the surface of the substrate. The engraving process starts when the bright points of the design start getting plotted on the substrate.

This is followed by focusing of the beam on each 3d coordinate. As soon as the laser beam reaches the focal point, the maximum power laser pulse makes a void in the substrate.

Once this coordinate is done, the beam will move on to the next coordinate and the whole process is repeated. Until the minimum number of points have been created to produce the design or pattern again within the substrate.

You just have to feed the design, let the laser do its job while you sit back in peace. Also, the substrate material would need your attention as well. After you are done with the engraving, you will have to remove all the burnt material.

However, the amount of debris varies with the type of material. One particular example is wood which produces a lot of wastage in form of oil when it is exposed to high power output laser beams.

The main difference between a 2D design and a 3D design is depth. In 2D design, you just have to feed in the length and width of your design with depth being a constant. The laser doesn’t produce varying depths in the substrate material and hence the 2D design is created.

But in the case of 3D laser engraving, the design is engraved by varying length, width, and depth in the material. The engraving thus seems like a pattern of hills and valleys with heights and depressions respectively.

In order to sum up the process, 3d engraving is basically the process of removing some areas of the material to imply different heights and depths on it.

What Makes It So Special?

3D laser engraving has perks to offer to all kinds of users. Be it a home-based small DIY business or be it an industrial setup, it’s equally beneficial. Let us list down some of the great perks and benefits this technology has to offer:

3D engraving technology can help you engrave complex shapes without having to worry about the dimensions or uniformity of the surface. Unlike 2D laser engraving, 3D laser engraving can engrave on conical structures, parts with inclination or slopes, cylindrical shapes, rounded or triangular shapes, and convex/concave areas of a shape.

All of this becomes possible because of the fact that the laser can adjust the beam position accordingly and focal length accordingly. This is something that cannot be done with 2D laser engraving machines.

To make a good deflection of the lens possible, it consists of an optical mode that focuses on the front. This enables the machine to use the larger coordinate axes. The use of such technology ensures that the engraving job is done with precision and with great finishing.

There is one stark challenge associated with operating a 2D laser engraving machine. When the laser focus goes up while the engraving is being done, it is observed that the laser energy of the actual surface takes a steep decline.

This makes the engraving process highly inefficient. On the other hand, 3D engraving is free of such challenges and hence it’s an ideal choice for engraving in depths.

Gone are those days when we used to watch 2D cartoons. It is not the same anymore. It’s the age of 3D where you can not only see tv shows and animations in 3D but actually create them too. The 3D designs are always made for particular orders.

Hence the level of customization is very broad and offers everyone the choice of their design to be engraved. 3D laser engraving brings life to the old 2D designs on your screen.

3D laser technology is more commonly used for creating personalized gifts for people. You may not find a good match for everyone in the store. Sometimes, you just have to be peculiar and that’s where 3D laser engraving jumps in.

The output of 3D laser engraving machines is of very high quality. It doesn’t tamper with the substrate and leaves no marks behind. The finish is as clear as crystal.

Since the laser has to travel through the material, it finds it difficult in the case of stone which repels it due to its hard structure. But, don’t worry, let us give you recommendations for the substrate materials that are compatible with a 3D laser engraving machine.

The most suitable and compatible material for doing 3D laser engraving is hardwood. Hardwood obtained from cherry, walnut, maple, and birch contains a very good grain structure which helps in creating a good engraving finish.

The details of engraving on hardwood are second to none. One might think that the laser burns the material and this is the wood that we are talking about. Is this dangerous? Not at all. The soot can easily be cooled off with the help of water while the engraving process is underway.

After the hardwood, there is acrylic that helps you create 3D designs with the help of a 3D laser engraver. Even though the hardness of acrylic is more than wood, it is easier to melt.

This ease of melting the material enables you to produce good quality designs and patterns on your object. In the case of clear acrylic, you might want to polish the surface of the engraving.

For all those who are always interested in creating customized products, the medium-density fibreboard is the material to go for. It can easily be painted later. Also, it’s readily available. Since its readily available, it is quite affordable as compared to other materials.

After the engraving operation is done, the surface can be cleaned by using an air hose or clothes that are damp. Painting can be done after the cleaning.

Crystals or more commonly glass have also proved to be great art when it comes to engraving. There are many 3d laser glass etching machines available in the market that can do the job but CO2 laser engravers have a reputation for performing the job in a much better way.

The wavelength of these lasers is absorbed into the glass. This absorption of the laser creates marks inside the crystal glass. People tend to buy 3d photo crystal laser engraving machines for their home-based business and that serves them just right.

Gifts that are personalized with portraits are also made with a 3D crystal laser engraving machine.

If you have a small setup and you’re looking for a high-end 3d laser engraving machine that fits on your desktop, look no further and buy Orion Motor Tech 40W Laser Engraver.

It is about time we talk about some 3D crystal laser engraving machine. Here we have for you, ST-801AB2. It’s a diode-pumped laser. It has an engraving speed of up to 3500 points per second.

The dimensions of the work area are 28x20x20 inches. The power is 800W with the minimum diameter of the laser being 6 um and a maximum diameter of 15um. This machine is air-cooled. 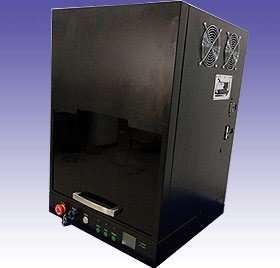 It wouldn’t be wrong to say that we won’t run out of topics to talk about 3d laser engraving machines. People are shifting their manufacturing facilities towards laser engraving technology. It is taking over every kind of primitive technology that was inefficient and not market-friendly.

Marking Technologies for Anti-counterfeiting: Every Business Should Know
May 27, 2022

How To Get Control Over Industrial Part Marking Noise?
May 23, 2022