Among the different materials used industrially, metals are the most rated and widely used. These materials have very good mechanical and visual properties making them suitable for making several parts and products. It goes without saying that metal is still the king of all materials, evident in its use in almost every second object we see.

For part identification and traceability, there is a need to mark metals. However, among the several marking methods and techniques available, laser engraving on metal is the most common. As a result, this guide aims to teach you about laser engraving. This will include the types of metal laser engraving machines and how to choose the right one for your business.

The HS-FL30A fiber laser engraver can act as a metal engraving machine due to its ease of use and functional capability. It has an autofocus design and an output laser power of 30W, which makes it a top metal laser engraver in several industries.

A summary of the features of the marking machine include:

The HS-FL50 is a 50W JPT Fiber Laser Engraver with Rotary Axis suitable for deep engraving or big area marking. Features of the machine include:

Why Use Laser Engraving?

Firms of almost every scale try to introduce traceability on their product since it helps them monitor their quality and maintain their unique identity. A laser engraving machine for metals leaves a permanent mark for such applications. For example, in the medical industry, metal laser marking machines are applied to maintain medical equipment’s identification and traceability.

These engravings are not only legible but permanent as well. This feature makes it once-in-a-lifetime work that doesn’t wear off and prevents product tampering.

Metal laser engravers are highly precise. As a result, they are suitable for marking heavy industrial metallic parts and graduating measuring tools. This is something that differentiates laser engravers from other types of engravers. Even dot peen engravers cannot engrave the smallest possible detail on measuring equipment as perfectly as laser engravers. Due to the automated engraving system of lasers, the markings are made without the possibility of human error. 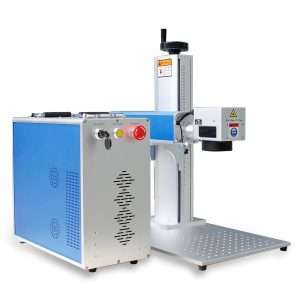 A 50W laser engraver is an example of a high-power fiber laser marking machine. Fiber laser engraving machines for metals are generally maintenance-free and can offer a service life of around 50k hours.

Just like fiber lasers, Crystal Lasers also belong to the same class of solid-state lasers. They have diodes containing doping elements neodymium and carrier crystal, which are responsible for generating these crystal lasers.

The wavelength of such a laser is also around 1.064 microns, making it suitable for marking metals and plastics. Crystal lasers cannot give you a maintenance-free time, unlike fiber lasers. This is mainly because of the diodes.

These diodes wear out with time, thus requiring maintenance. You might have to perform your scheduled maintenance after employing the laser for 15k hours. Crystal lasers work perfectly on coated metals, but their scope is beyond metals also. Crystal lasers can engrave on plastics and ceramics as well.

Common Metals You Can Mark with a Metal Laser Engraver

Following is the list of metals that can be engraved using metal laser marking machines: 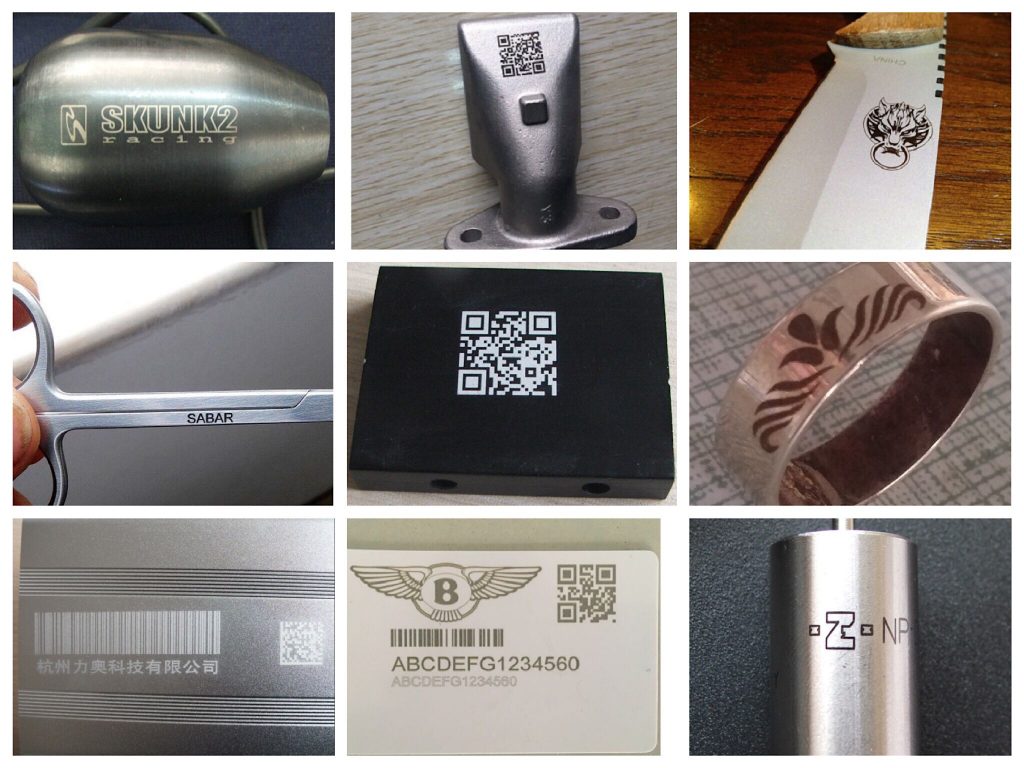 You can also use laser etching with aluminum if faster operation is the goal. However, laser engraving leaves a more robust and permanent impression on the metal. The most common types of aluminum used for engraving purposes are 380 and 6061, but that doesn’t mean that the rest are incompatible. It’s only about more common types.

Steel is one of the most robust materials in general-purpose metals. It requires a longer time for surface treatment; hence engraving is comparatively harder, or we can slower (slightly) in the case of steel.

Having said that, the speed of the metal engraving machine for steel can be increased by adjusting or compromising the color of the marking. Higher engraving speeds produce white marks, and lower speeds produce black marks.

Apart from etching or engraving, the laser annealing on the steel gives more corrosion resistance. Rust is the ultimate enemy of steel; hence you might not want to waste your material by exposing it to its worst enemy. Steel tubes, sheets, pipes, and springs are the most common products which undergo laser engraving.

Industries commonly use stainless steel of grades 316 and 306 for laser engraving purposes. However, like plain steel, laser annealing is the better method as it prevents SS from catching rust by leaving the oxide coating of chromium oxide on the surface untampered.

Industries use magnesium whenever they must fabricate lightweight parts. Hence, they need a non-contact marking process such as laser engraving. In contrast, marking systems such as dot peen marking need to have a tight grip during the process, which can alter the shape of the material.

Laser engraving machines are suitable for marking magnesium parts, including gearboxes, steering wheels, and engine casings. As a result, they ensure proper identification and traceability.

Unlike aluminum, lead has low thermal conductivity. This low conductivity means that the heat generated during the laser engraving would not seep away into the surroundings but instead stay on the surface. It is easier to engrave lead with laser marking machines since it has a low melting temperature, and the engraving process is easy and speedier. However, you should ensure you use a low-power fiber laser engraving machine if lead is the substrate metal.

Laser technology is second to none when engraving on metals due to its efficiency, speed, reliability, precision, and maintenance-free attribute. Are you working in an industry that deals with metals only, and you need marking done? Metal laser marking machines should be on top of your list. Know your metals and choose the right laser engraving machine for your business. It’s time to lead the business like a perfect professional, and with HeatSign, you have a winning chance.

What is the difference between laser engraving, laser etching and laser marking?

There are basically three types namely laser marking, laser etching, and laser engraving. While all three of them might seem similar, these are not!

Laser marking can be done with relatively low-powered laser devices. Since the beam is low-powered, it doesn’t raise the temperature of the substrate metal as high as in the case of the other two techniques.

The four major types of laser marking are annealing, foaming, carbon migration, and coloration. This laser technique is less common as compared to engraving and etching.

Laser engraving is not recommended for parts that are critical to safety rather for parts that are subjected to wear and tear. It can be used to create indentations on materials other than metals like wood, plastic, leather, and glass.

The laser etching process is somewhat a child of laser engraving. In this technique, the heat of the beam creates indentations in the substrate material. Decent depths can be achieved through etching but certainly not more than engraving.

Etching also changes the surface behavior of the metal like the contrast and hence the reflexivity. The etching is best suitable for plated metals but the scope is not limited to metals only. It engraves ceramics and polymers, too.

14 Materials You Can Engrave with Fiber Laser Marking Machine
October 11, 2022