In this revolutionized era of technology, where billions of products are being made every day and everywhere, it is of utmost importance to have a unique identity and image. If you don’t have an identity, you don’t exist.

This goes without saying in the industry because there are almost hundreds of companies competing for a similar product. Seeing all of this, it is crucial to identify your product with your logo and put a serial number or a code on it that could lead the customer back to you in case of any feedback or complaint.

Considering all of this, we have several different techniques available. But in this article, our substrate would only be metal. For identification, on the metals, we have electrochemical etching, laser etching, dot peen marking, and inkjet marking.

In this topic, we are going to debate electrochemical etching vs laser etching, so bear with us!

The main difference between Laser and Electrochemical Etching Machine

There are different terms being used in the industry for identification techniques. It’s called etching, marking, and engraving. But are these all similar?

Before we go into the detailed debate of electrochemical etching vs laser etching, let us discuss the fundamental difference between etching and marking.

The etching is a type of information-inducing technique on the substrate metal that produces a small cut on the surface which removes a little bit of the material. This kind of treatment leaves a light mark more often white in appearance. 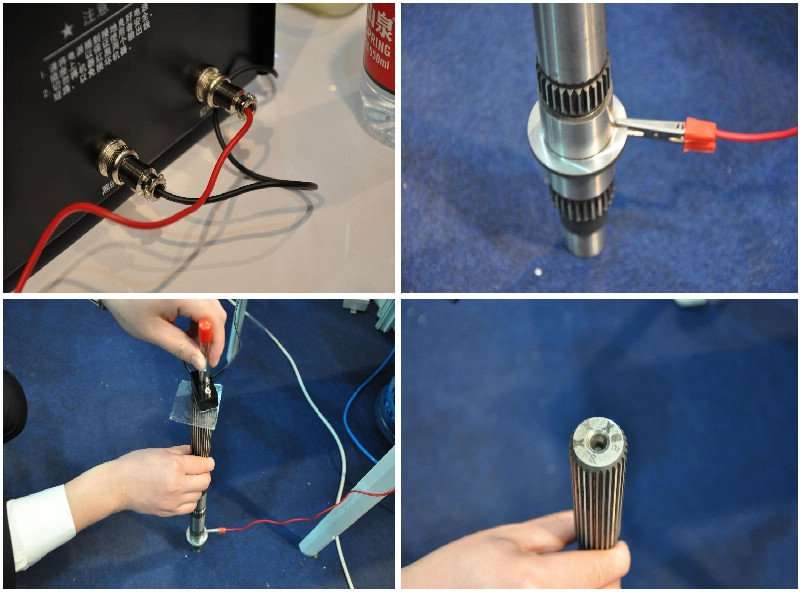 Marking, in contrast to etching, is a technique that doesn’t tamper with the top layer of the metal. It treats the surface in a way that leaves a dark impression on the surface of the metal without even penetrating it.

Almost all of the industries that work with metal require identification or traceability. If not these two, then marking or etching techniques are being used for displaying brand information or to produce different patterns, profiles, or designs for beautification needs.

Automobile industries manufacturing parts and products have to abide by the laws which require the vehicles to be identified uniquely. For this purpose, laser and dot peen marking is being used.

For companies wanting to display their brand information, like logos, punchlines or anything that leads the customer to them, on metal pieces are employing electrochemical etching since it’s very precise and gives good finishing.

Electrochemical etching gives a darkish tone that compliments the greyish color of the metal hence is preferred by many professionals. Other parts like machines, pipes, hardware, and tools require barcodes, serial numbers, logos, and tracking numbers on them. They all fall under the umbrella of etching and marking needs.

The markings or impressions induced by these techniques are not only legible but also permanent in nature. These permanent impressions don’t come off until and unless the surface is ground to a few inches. Removing the surface removes the impression thus making the product brand new.

Since the information doesn’t wear off due to any weather conditions, most companies use these techniques to portray their professionalism. This information display makes them stand out from the rest of the dull machines or equipment.

In this topic, we will be discussing electrochemical etching in more detail in comparison to laser etching since there are tons of articles for laser etching available on the web. So, let’s begin so that you can decide what to choose and when to choose!

Electrochemical etching is a type of etching technique used to transfer information on the substrate material, conductive metals, using the simple principle of electrolysis. Its apparatus has the following essentials:

The reason behind keeping the same metal as both, anode and cathode, is to avoid any uncalled for electrochemical effects associated with electrolysis. The negative ions to be produced in the process must be of the same metal, too.

When the switch is turned on, the current flows through the anode which dissolves it into the electrolyte as an anion. Since the cations of the same metal are already present in the electrolytic solution, both of these ions, positive and negative, combine and get deposited on the cathode.

Some other effects can take place during this whole phenomenon but that doesn’t usually are of concern. The main concern is the deposition of the substrate metal. The marking head in the apparatus is connected with the DC source. A marked stencil containing the marks of information to be etched on the metal is dipped in the electrolyte solution.

While all of these have their own applications depending upon the use, they all find the same primary purpose; to translate the information on the substrate.

The life and usage of these stencils vary but roughly one photographic stencil can be used for almost 1000 iterations. This includes oxide marking. All you have to do is to make the desired artwork and translate it on the stencil. The rest is just easy.

The printed stencils are a little more rugged and tough but almost similar to the cartridge stencils. These stencils have standard dimensions of 106 by 210 millimeters. The formation of these stencils requires software connected with a thermal printer having a resolution of 300 dots per inch.

The software can either be DCM, Label Director Enable. Any of these would provide high customization of information. Industries having aeronautical parts, nonlinear surfaces, etc. use such machines.

The instant cartridge stencils, as evident from the name, are disposable stencils that we use to etch serial numbers or codes with repetitive information. We just have to print the information on the stencils thus making them easily available anywhere and everywhere.

The printer can either be an independent one or the one that is available via a computer. The etching with light whitish color can be the result of using a printer of at least 360 dots per inch resolution.

These stencils find their applications for longer productions that require batch markings or etching. These stencils employ a dot matrix printer for printing needs. The quality of the etching depends on the quality of the print on the stencil. Thus a high-quality printer used on stencil would result in a higher quality of etching on your metal.

Although there are many great companies manufacturing the machines and spares for electrochemical etching, we are going to recommend only one. But it is highly subjective and doesn’t demean other products available in the market.

The machine we recommend is from Universal Marking Solutions (UMS). It is a ME3000T Marking Machine. This is the most advanced electrochemical etching equipment that we came across in the market.

It can etch barcodes, data matrices, serial codes, and logos, etc but only in 2d obviously. It can be operated by hand whereas fully automatic gear for the machine is also available.

Following are the features of this great machine, have a look at them yourself:

Laser etching machines differ from electrochemical etching machines in the way that they intrude on the surface of the substrate metal. Due to this intrusion, the metal faces the weather conditions like humidity and moisture.

This exposure brings rust to the surface. Due to this complexity, laser etching cannot be used on aeronautical machines where this point is crucial.

Both of these etching technologies differ on the basis of the source of the laser. The fiber laser etching machines are the most advanced and speedy etching machines that can get your job done in a blink of an eye. Precise lenses amplify the laser. This helps in focusing the beam on the substrate material.

The top manufacturer in fiber laser technology is undoubtedly HeatSign. Their HS-FL50 is a state of the art fiber laser machine. This 50W output laser machine has an etching area capacity of 110x110mm. The etching speed goes up to 9000 mm per second.

The depth of the etching can reach up to 0.5mm but it is highly dependent on the speed of the laser and the substrate material. The harder the material, the longer it takes to create the required depth.

Hence, you have to set the right parameters for your required depth and speed. Just like electrochemical etching machines, fiber laser etches on metals, too.

CO2 Laser machines produce laser when current passes through a mixture of gases containing carbon dioxide. This type of machine differs from the fiber laser machine in a way that it can etch on materials other than metals also. This includes organic materials like wood, paper, ceramics, paper, etc.

Ultraviolet materials produce ultraviolet lasers. Just like CO2 laser machines, it is suitable for nonmetals like plastics and glass. Glass and plastics have a huge industry all over the world. One can imagine the number of these machines which we are using for information display on the parts.

The main difference between Laser and Electrochemical Etching Machine:

The main difference between the laser and electrochemical etching machine is that the information is given to the software or the pc in the case of laser etcher and then the automatic procedure starts. This saves a lot of time and it does the job of changing the numbers on its own where required.

However, in the case of the electrochemical etching process, you’d have to make your stencil every time you require a change in information. This gets very frustrating in the case of long production lines where you have to etch recursive information on the workpiece.

If you have any questions or inquiries, feel free to contact us.